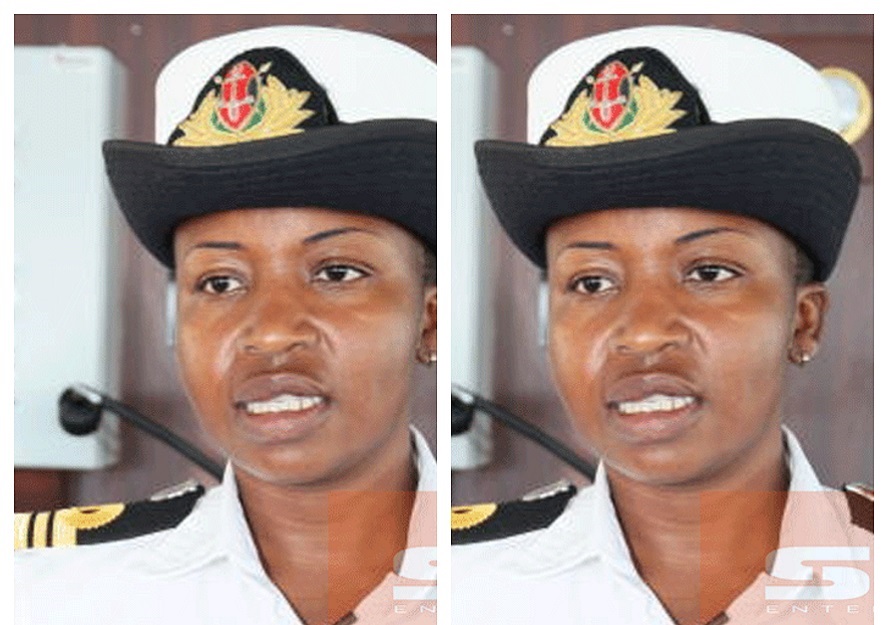 Major Faith Mwangadi has made history as the first woman to command Kenya’s warship.

From the Magariri Sub-county in Kilifi, a town on the coast of Kenya, north of Mombasa, Mwangadi had no intention of being an army officer whilst growing up.

Smart and intelligent, she had scored impressive As in High School and hoped for a career in medicine.

But the authorities at the Kenyatta University denied her and gave her a general degree course.

According to The Standard, Mwangadi would spend only three weeks at the university. She chanced upon a newspaper ad calling for candidates to recruit in the Kenyan Defence Forces. That was it for her. No medicine. No university degree.

“I was eager for a quick career change after my disappointment in being left out to do medicine.

“The military, which was not a familiar territory for me at all, was my next target,’’ she said.

Mwangadi applied and was successful. She joined up for training at the Kenyan Military Academy in 2007.

After attaining a diploma in Military Science, Mwangadi would further pursue a degree through distance learning from Egerton University – a Kenyan public university.

Mwangadi’s journey to becoming Kenya’s first female commanding a warship hasn’t come easy, especially in the pursuit of her junior officer conversion courses during which she was trained locally and abroad.

“During the conversion training, we attended both classwork, went to sea and did administrative training,” she told The Standard.

Mwangadi came out the best student in her class. She would then attend the Brittania Royal Naval College in May 2010 for the Royal Navy Young Officers’ course.

‘’Here, the course duration was seven months with four involving going out to sea for navigation practicals and sea manoeuvres. “We trained along the English Channel, the Atlantic Ocean and in Belgium,” she said.

The Standard reported that she sailed aboard HMS Bulwak, a Landing Platform Dock that was extensively used for training.

Then a Lieutenant, during her training in the UK, Mwagandi, underwent extensive practical application of naval training, leadership, command and management.

When she returned home she was posted to the Kenya Navy Training School as an instructor.

She would be onboard Kenya’s first research vessel, the RV Mtafiti owned by the Kenya Marine Fisheries Research Institute, but fully manned by the Kenya Navy, as a navigating officer between 2016 and 2017.

Her next stop was at the KNS Shujaa, where she was deployed as a principal warfare officer in 2017.

She was part of the naval crew making her maiden voyage after the ship underwent a mid-life refit in the Netherlands.

Mwagandi is currently in active Amisom duties in Somalia assigned aboard KNS Shupavu.